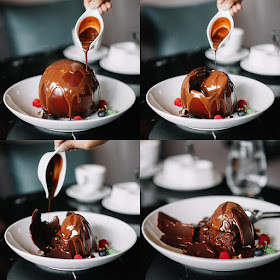 There was this black and under-constructed building that caught my attention when I was having my dinner at Ms. Choo and three weeks later, it is now this newly opened chic-looking restaurant in Senopati area called Monty’s, another venture by Klabo Group, the people behind Nip & Dram (in Landmark building) and Ivy's.

Senopati area is highly known for a foodie destination with the rapid number of restaurants growth in this elite neighborhood, but for those who are not familiar with Senopati (are you kidding?), the neighborhood mostly features big, extravagant and loaded that are now functioned as restaurants, cafes or coffee shops. So far so good, the only thing sucks is the less and less number of parking spots and everyone’s now left with no option but to go valet. 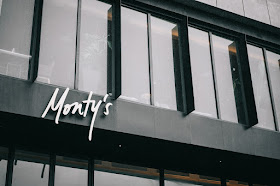 Monty’s located at just the opposite of Ms. Choo & very near to Three Buns, and from outside, it looks like this minimalist-industrial building, all painted in black and with a little touch of unfinished sense to it, but somehow very posh to me. Inside, you’re going to find a simple restaurant which they prefer not to have so much going on, but as they keeping it simple, the classy feeling somehow align with it. Black marble table, white plates, wine glasses and a good daylight and I am on board. 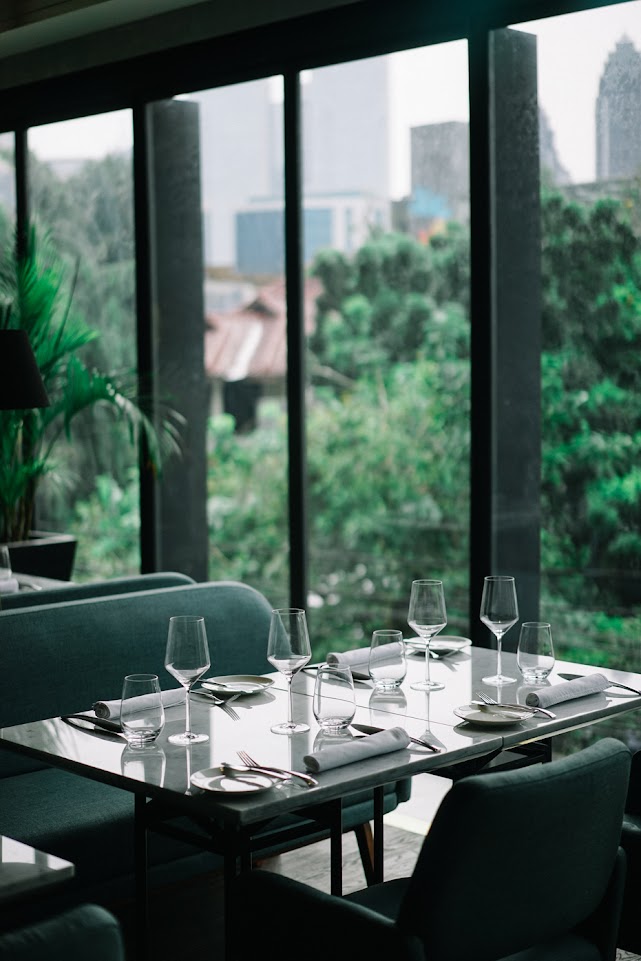 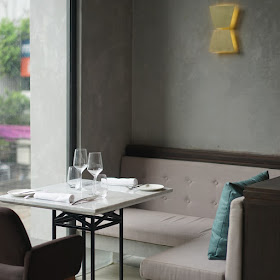 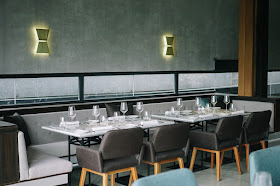 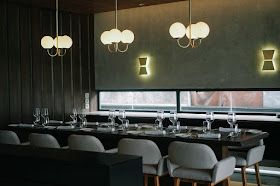 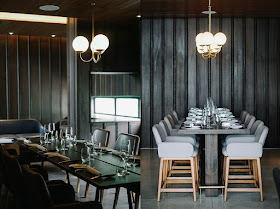 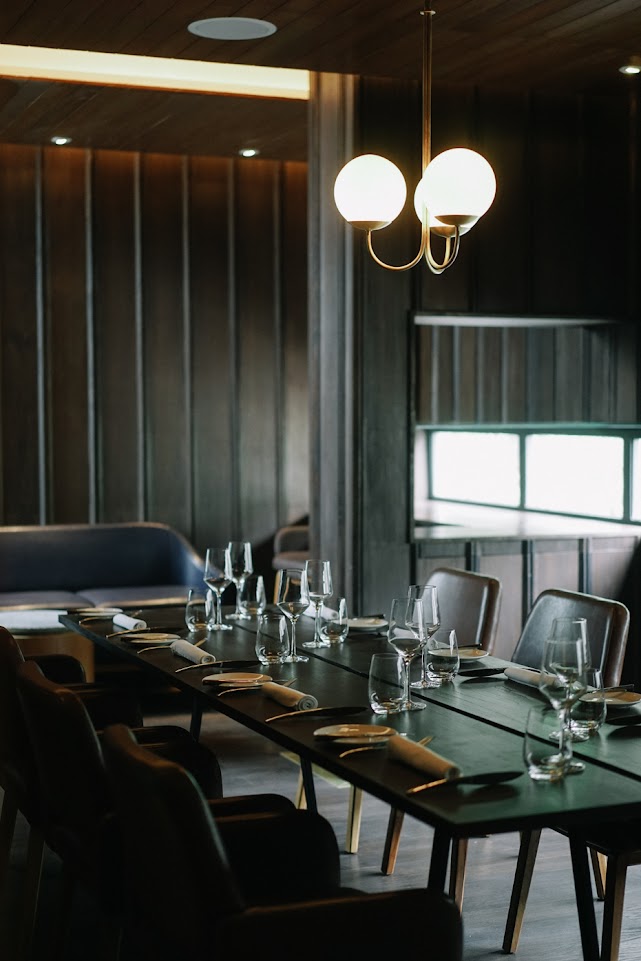 The concept & genre of the food here is “international modern European-western cuisine”, including a little touch of Scandinavian, but after a quick scan, it’s still mostly headed by the Italian and French menu. The executive chef here is Christer Foldnes (who is a Norwegian) and used to be the executive chef for C’s at Grand Hyatt (which is one of my most favorite place to have steaks and grills), hearing that, it was kind of promising already that I was about to have just a good lunch. 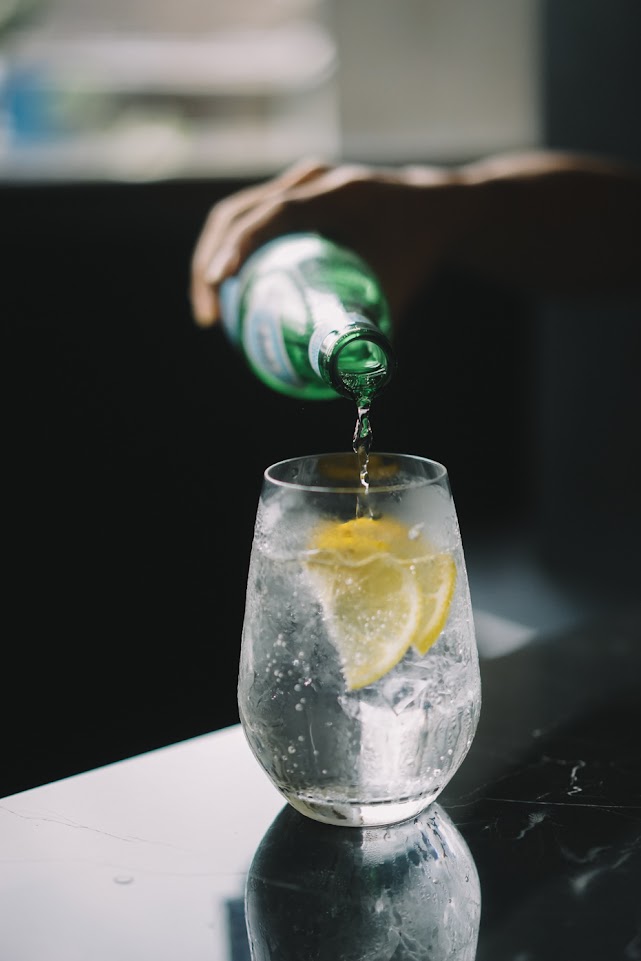 Organic Kale and Green Pea Soup
IDR 110k
I prefer having my lunch or dinner kicked off with soup as I think it really warmed up my appetite. One of the most anticipated soup here is this organic kale and green pea soup with black mustard and topped with sour cream, rumor has it that they stocked the organic kale from Cathy’s Sharon organic farm (boy I just knew about it). The soup was nicely seasoned, and flavor wise, dominated by the green pea flavor, well that’s because kale’s natural flavor is more like bland. It’s indeed a heartwarming and convenient start up, best served hot. 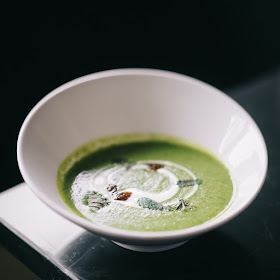 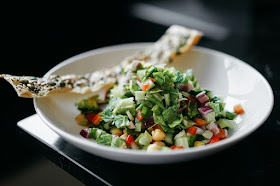 It did look healthy from the amount of greens in this salad, when I thought it’s gonna be just plain boring, this was actually a very tasty salad with fresh ingredients like chickpeas, cucumber, tomato, green beans, red onion, and infused with the right amount of sourness from the lemon aioli dressing. The salad also consist of diced turkeys to add in the fun factor and the savory flavor. 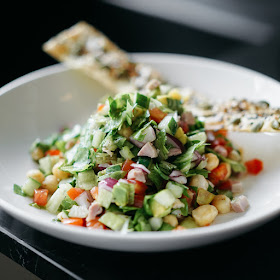 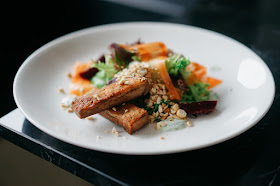 This was one of my favorites of the day, the roasted pork belly was cooked until dry and when I say dry I mean very crispy on the outside but the meat and fat remain tender and juicy, seasoning was light and the flavor of the pork meat did all the talking, even though it’s being paired with the coriander yogurt sauce, to me it’s almost unneccesary and I prefer having the roasted pork belly just like that. The portion came with condiment combination such as fresh pickled carrot beets, some greens and toasted cashews, together it’s almost like a salad dish. 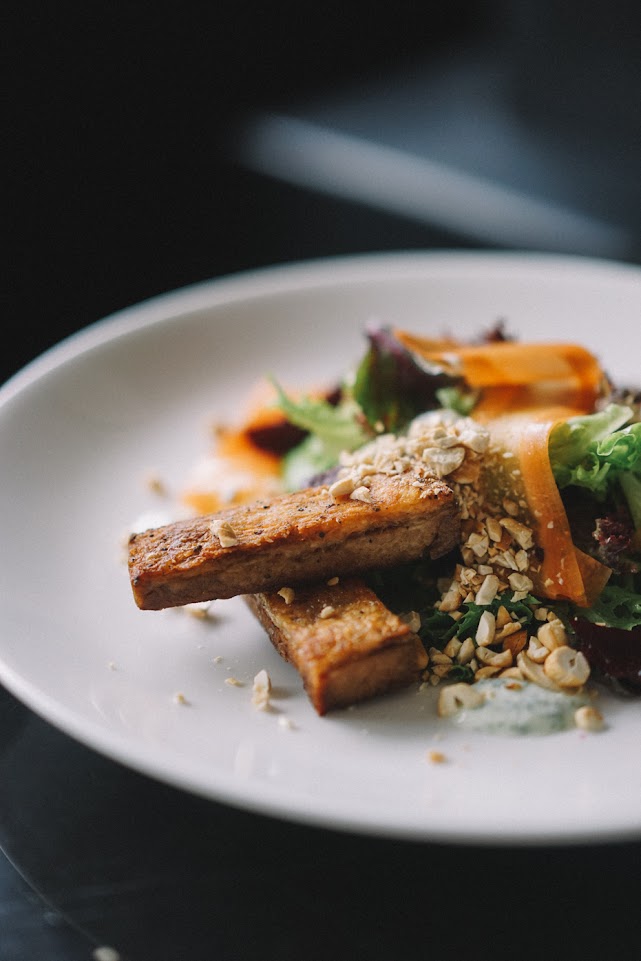 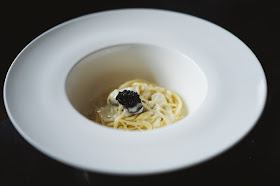 First of all when you’re shocked with the pricing already, let me tell you that this is not their regular portion HAHAHA, I mean whoever charge that much for that little portion should end up in jail and illegal. I asked for the small sample size hence I don’t actually know how much they charge for it. The pasta was very creamy and slightly milky for my liking and I didn’t really experience that champagne flavor or aroma, but in a way that’s good because I indeed prefer my pasta to have that more savory flavor tho. I was quite fond of the texture of the pasta. As an avid fan of oyster, I found their oyster fresh and chunky. 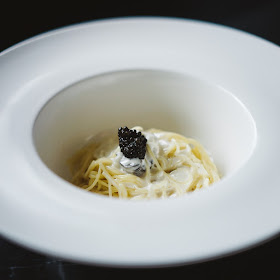 Norwegian Salmon
IDR 270k
First of all, I was super fond of the idea of layering the top part of the salmon with nut crust, I just felt like that extra special texture gave something special to the overall performance (not only appearance). The salmon was cooked beautifully, silky and seasoned very lightly. The serving came with caramelized lemon and broccolini. 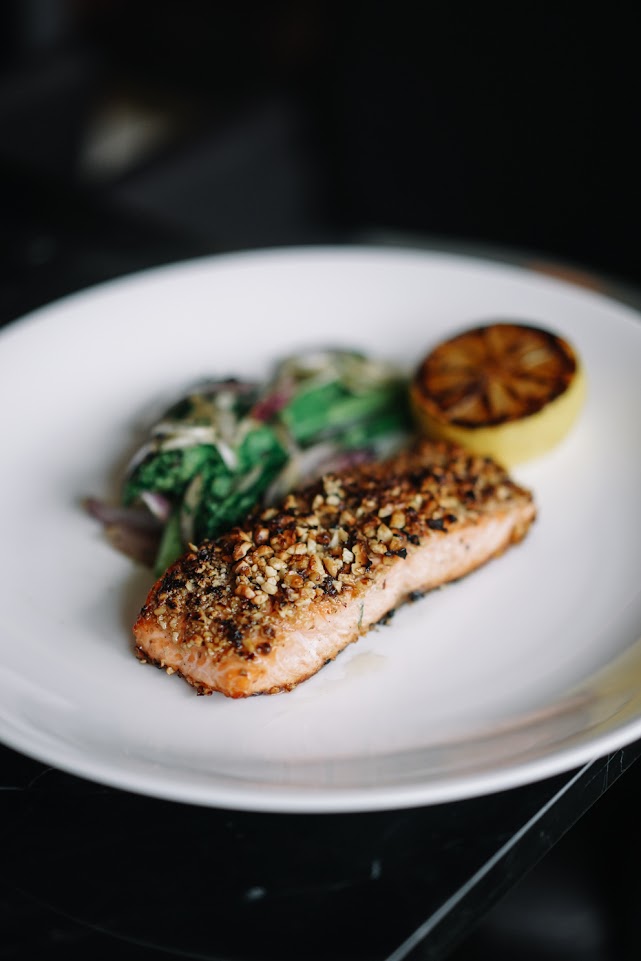 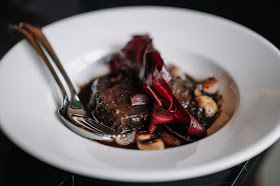 Texture and flavor wise, my favorite of the day from their main course range. The beef cheek was cooked perfectly with remaining tender meat & juicy fat! I think beef cheek is always wonderful with Bourguignon style and that’s exactly what they’re doing. For those who don’t know, Bourguignon is the cooking style where the beef is being braised in red wine along with the other ingredients such as beef broth or vegetables. The cooking took about 6 hours and the result, one of the tastiest beef cheek I’ve had in a long time. 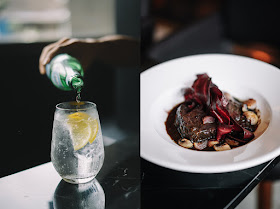 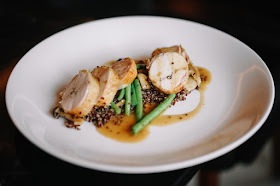 This dish was very safe and kind of plain to me, both gravy and chicken were already good, but I expected the chicken to have that more tender consistency and slightly more brown on the outside. 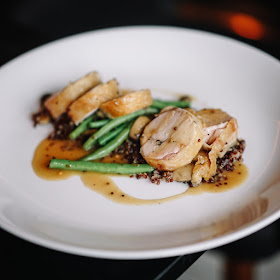 Pickled and Smoked Herring
IDR 110k
This dish is very Scandinavian inspired, appearance wise, in Indonesia, Herring fish looks pretty much like Bandeng fish and not to mention, very nutritious as well! Herring fish contains a lot of vitamin D and currently the second largest after cod. Here they produce the dish with the “pickled” and “smoked” method, when it’s actually served to my table, it kinda smelled fishy but as soon as you tasted it, it was nowhere around it. The fish was very fresh and smoked just on the proper temperature & timing resulting this silky and chewy fish meat. Have them with their Rye bread and add in fresh pearl onion (like very fresh), baby potatoes and sour cream. 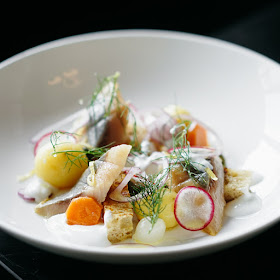 Dark Chocolate & Chili
IDR 100k
This could be a good choice for those of you who are living the gluten-free life as it’s actually a flourless & gluten free cake! The twist came from the flavor: it has chili flavor infused to the dark chocolate cake. It was spicy but not overpowering for me, all still on a good balance, and hey, the serving came with vanilla ice cream and raspberries so you’re basically safe! 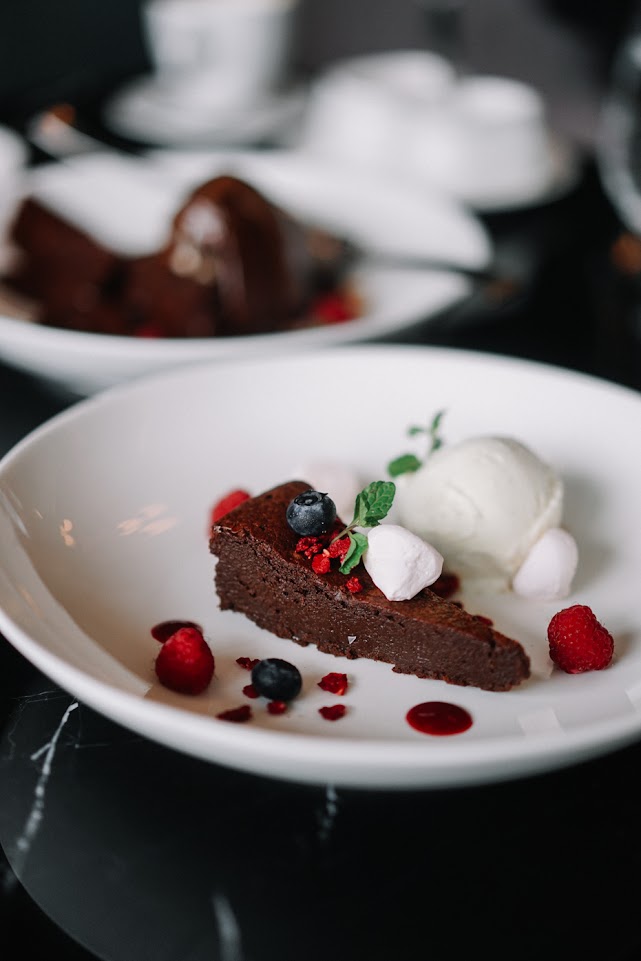 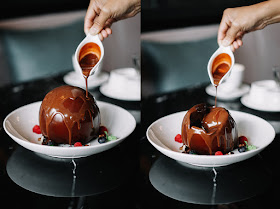 This one definitely takes the cake as one of my most favorite dish of the lunch! Presentation wise, it’s beautiful and if food can be pretty, who don’t they? I love pretty food (sometimes I just love eating with my eyes too!). When it’s served to your table, you’re going to see this dome shaped form made from chocolate with a surprise inside. The idea is to pour the searing thick hot chocolate and Whiskey sauce all over the dome to melt the “shell”, and you’re going to find a beautiful sticky toffee-chocolate pudding topped with vanilla ice cream! Short to say, it’s like chocolate overdosed! The chocolate sauce was very rich but I didn’t experience that much of a rich Whiskey flavor, and the sticky toffee-chocolate pudding was just amazing, even more when you pair it with vanilla flavored ice cream, just altogether yum, sweet but still on a good balance. You know what, just eat it and don’t bother counting the calories. 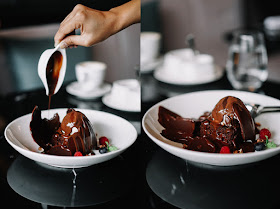 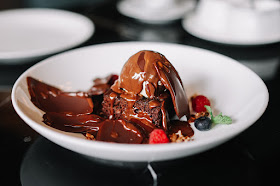 I must say I had a quite enjoyable lunch, probably the quiet ambiance and the fact that it was raining gave that extra support, sometimes there’s just something special about rain you know! The food was fresh, tasty and heartwarming. If you want to hear from me for a good lunch set, kick off with their kale soup, beef cheek for mains (or pasta if you're feeling one), and end it with any of the chocolate dessert. Eating here is clearly not cheap, but there’s always a market for it, and it’s never a bad idea to try & experiment J. In the mean time, best of luck for Monty’s! 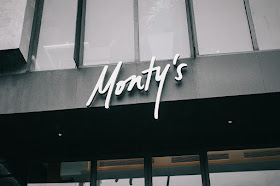